On November 15th, 2018, Bitcoin ABC a development team behind Bitcoin Cash will be releasing a new fork again after their recent network upgrade on May 15th this year. Bitcoin ABC has a responsibility to ensure that people are ready for the update and that none of the technology behind Bitcoin Cash are affected by the roll out.

The updates for the new version are available for download but the new upgrade will not go live until November 15th. 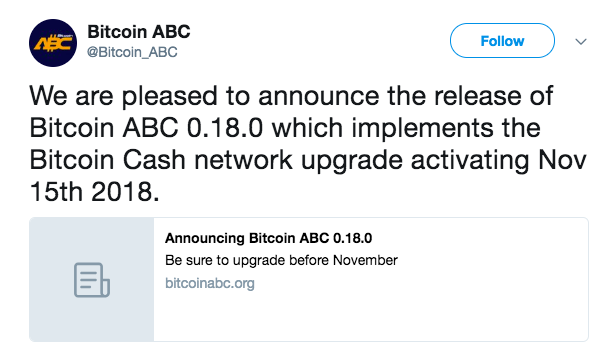 Bitcoin ABC’s new upgrade will help create “sound money” that is usable by everyone in the world. Bitcoin ABC believes that they represent the next step towards this goal. They also aim to work in the best interests of miners, investors, and users of Bitcoin Cash and will collaborate and coordinate with other teams and projects in the Bitcoin Cash ecosystem. They will also focus on improving the utility of Bitcoin Cash and enable massive on-chain scaling.

gr8ful4 an enthusiastic Redditor is of the opinion that:

“Dev team competition, as it should be. After reading the discussions (especially) in the last week, I sense this is a rather rushed/stubborn move and should be consequently punished by the market/miners.”

The new updates include several minor technical fixes and improvements. They have been focusing to become a solid base for application development and innovation. They will enable the use of oracles and cross-chain atomic contracts and will introduce a canonical transaction ordering which is a technical building block that lays the foundation for massive scaling improvements in the future.

CTOR allows all its participants to zoom into a block to identify whether a transaction is found or not without processing the whole block. This property will allow chainless apps to gain the possibility to verify flows of transactions without being encountered by an arbitrarily large blockchain.