Recently, Chainalysis, a blockchain analytics company, conducted a research wherein it found that the month of March saw Bitcoin Cash transactions amounting to $10.5 million. The research revolved around Bitcoin Cash payments made to 17 largest cryptocurrency merchant processors globally, such as GoCoin, Coinify, BitPay. In May, these payments experienced a huge slump of $6.8 million and were recorded to be $3.7 million only.

Meanwhile, Bitcoin payments also did not show much hope as the amount dropped from a high point of $412 million in September 2017 to about $59.9 million in April 2018. Earlier this month, Roger Ver, the CEO of Bitcoin.com and one of the biggest touters of Bitcoin Cash tweeted his opinion on both the tokens. He wrote:

To this, TokenPay, the new partner of the Litecoin Foundation and a cryptocurrency platform replied. Its official Twitter handle commented:

“What is BCH? Is that some sort of fake Bitcoin?”

As Ver keeps tweeting frequently on Bitcoin Cash, one of his recent ones also carried explanation on the utility of the cryptocurrency. 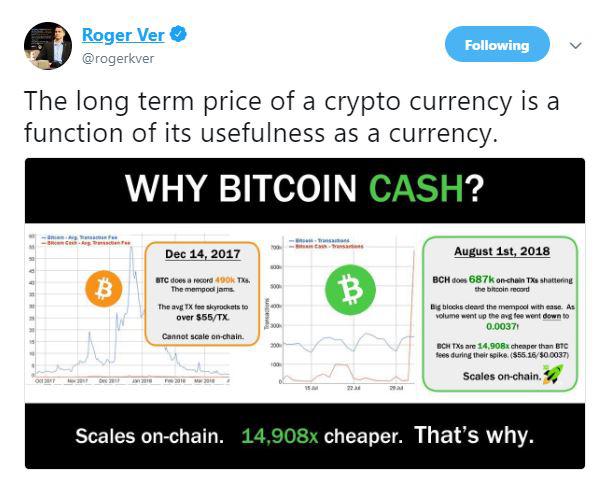 Additionally, according to the data of CoinMarketCap, the market cap of Bitcoin Cash is roughly only 10% of that of Bitcoin with BCH sitting on the 4th position in the rankings. Bitcoin Cash hard forked from Bitcoin Core in August 2017 with an aim to defeat the drawbacks seen in Bitcoin payments.

The CSO of Blockstream, Samson Mow recently pointed out an opinion that the upcoming IPO of the leading Bitcoin ASIC mining company Bitmain could be risky due to its large holdings of Bitcoin Cash. Subsequently, the CSO also stated that the cryptocurrency has lost millions in the course of three months and could have lost more had the Bitcoin developer not disclosed the vulnerability in Bitcoin Cash.

In the past week, Bitcoin Cash also became nChain’s choice for its new blockchain implementation that is to be named as Bitcoin SV wherein SV is the abbreviation for Satoshi’s Vision. nChain is a blockchain firm that works towards the development and research in the blockchain technology.