On 9th August, Vitalik Buterin, notably the Co-Founder of Ethereum put up a poll on Twitter regarding Bitcoin’s block size. Buterin, who has a strong online presence touched a chord, aimed at Bitcoin enthusiasts with his tweet. 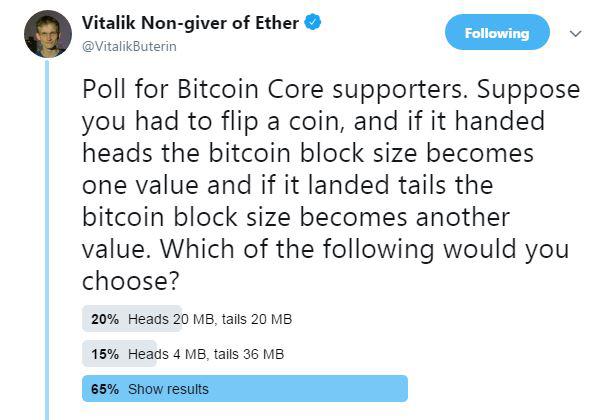 The cryptocurrency community is at loggerheads regarding the block size debate. There are those who are in favor of an increase in block size and an entire section that is against it. Since 2010, Bitcoin’s block size is limited to 1MB as opposed to perhaps Bitcoin cash’s block size of 32MB.

Bitcoin skeptics argue that due to the 1 MB block size limitation, the number of transactions being made per second [7 for Bitcoin] is minimal as opposed to Bitcoin cash’s 100 transactions per second. This results in increased transaction fees and a very busy and slow network.

Buterin seems to hold the same opinion as Bitcoin skeptics. In his tweet, he has tried to bring attention to Bitcoin’s scalability issues. He further added:

“I just wanted to add a word to signify that the poll was meant to target proponents of the small-block, scaling via lightning network first, (almost) no hard forks… position. Plenty of people are Bitcoin supporters and have no opinion on those issues. What would you recommend?”

Buterin argues that the Lightning Network that is powered by Blockchain smart contracts, allowing blockchain transactions to happen off-chain [transactions will no longer be validated by miners in the blockchain as they are ‘off the chain’] is not the best solution for scalability. Users exploded on Twitter with numerous replies to Buterin’s surmises.

“I don’t know about your Ethereum developers, but Bitcoin core developers work on scaling the network by writing quality code, not by flipping a coin at some My Little Pony dance party.”

” He is not keeping up with Bitcoin, too much to be fixed on Ethereum.”