One of the biggest scams in the history of the Indian subcontinent may have been carried out using Bitcoin [BTC]. In Surat, Gujarat, recent evidence has emerged that states that a scam scalped about $3 billion off investors.

The story begins in November of 2016 when Indian Prime Minister Narendra Modi declared that the biggest note in circulation would cease to be legal tender. This included the INR 1000 and 500 notes. The surprise move of demonetization took many by shock, and found them without a way to subvert tax laws and gather black money. 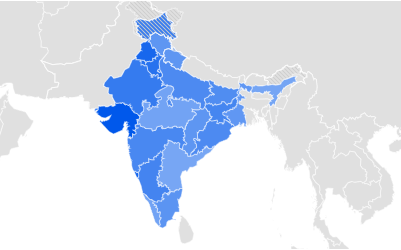 Google Trends search data showed that traffic for queries such as “how to convert black money to white money”, and generally related to money laundering emerged. Corrupt and non-tax-paying Indian citizens soon found themselves turning towards cryptocurrencies for storing their sizeable wealth.

Soon after demonetization, word emerged around online chatrooms and trading desks that Indians were looking to buy Bitcoin at premiums of close to 25% the trading price. Kiran Vaidya, Product Manager at U.Cash, stated:

“After demonetization, we were watching India. We’d seen how bitcoin rose after the Greece economic crisis and similarly after things went south in Venezuela. The volumes were so high that it was obviously people who had the capacity to move markets.”

However, the clues that led to the uncovering of a bigger scam emerged in February this year. Shailesh Bhatt, a property developer in Surat, complained to Gujarat’s Home Minister about a group of policemen, who reportedly kidnapped and extorted him for 200 Bitcoin, which was worth around $1.8 million at the time. The investigation after then proceeded to uncover evidence that shows fraud in an “epic scale”, as described by Gujarat’s Criminal Investigation Department.

After investigations, 8 policemen were accused of the kidnap and extortion of Bhatt, an effort orchestrated by his associate, Kirit Paladiya with the help of Paladiya’s uncle, Nalin Kotadiya. Notably, Kotadiya was a lawmaker in the Bhartiya Janata Party. Paladiya is currently in jail under charges of abduction and extortion.

However, upon further investigation, police decided to include Bhatt in the list of accused. Currently, both Bhatt and Kotadiya are absconding. However, Kotadiya has stated that Bhatt is responsible, but both have denied any wrongdoing in the matter.

At the crux of the matter is Bhatt’s movement into cryptocurrencies. He invested in the well-known Ponzi scheme Bitconnect between late 2016 and early 2017. At the time, the scam was being promoted by Satish Kumbhani, who was one of the founders of Bitconnect. After investing in it along with many others in the state, the total takeaway of the Bitconnect scam in Gujarat alone come up to $3.2 billion. However, an accountant for some of the biggest businesses in Surat spoke to Bloomberg and quoted the figure as being around $650 million in just black money.

However, around January this year, Bitconnect was struck with a cease-and-desist order in the United States due to it being a scam. This was then followed by a multitude of cases against the firm in India, but those affected could not go to the authorities for fear of their assets being seized. The Reserve Bank of India [RBI] also banned banks from processing transactions related to cryptocurrency firms, which further tightened the grip.

Bhatt and his associates were among the group of people affected deeply by the BitConnect scam and sought a way to get their money back from those who had stolen it from him. They proceeded to kidnap two BitConnect representatives in Surat and demanded a ransom of 2256 Bitcoin for their freedom. However, Bhatt’s associate Paladiya wanted more and used the influential power of his uncle to double-cross Bhatt and extort the Bitcoin from him.

Bhatt pressed charges against his former associates, and then went underground. He then denied any wrongdoing and stated that Paladiya handled all Bitcoin transfers, as he was not ‘tech-savvy’.

GVL Narasimha Rao, a New Delhi-based BJP spokesman clarified that Kotadiya is no longer with the BJP. He also stated that the Gujarat government is dealing with the matter. However, Jitendrabhai Vaghani, BJP president for Gujarat, answered a call but disconnected when Bloomberg told him the question was about the cryptocurrency fraud, ignoring all forthcoming calls.

“If more names of politicians do come out, there could be a price to pay. The government will have to find the absconders and bring them back.”