On 20th August, on the official Twitter handle of Cointree, a platform used for the purchase, sale, and store digital currencies including Bitcoin [BTC], Ethereum [ETH], Monero [XMR], and NEO [NEO], has announced a partnership with Gobbill.

Gobbill is a digital financial assistant that automatically pays bills and invoices. Being sponsored by Microsoft, it can support bills from utilities, telecommunications, insurance, and council rates. This collaboration would enable Australian citizens to pay their bills using cryptocurrencies. 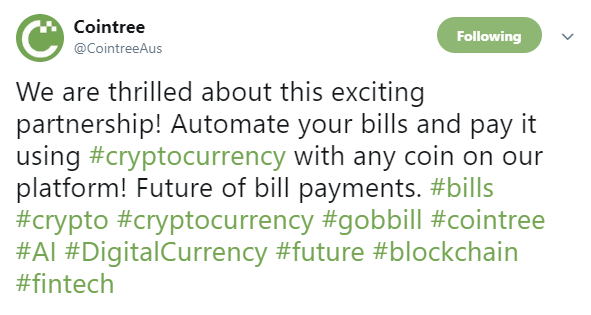 Cointree was established in the city of Melbourne, Australia in 2013, with the main objective of making blockchain technologies more accessible and easier to understand for the common man.

The Co-Founder of Gobbill, Sheldon Ewans, disclosed that he did not have much knowledge about cryptocurrencies and it wasn’t until earlier last year when he finally started working on cryptocurrencies. He revealed that this was what pushed him to collaborate with Cointree.

He spoke about the partnership, stating:

“I have traded, but not very successfully. That was the appeal of Cointree. I’m a novice and I’m surrounded by people at [fintech co-working space] Stone and Chalk, who are deep crypto specialists”

He further adds that in the future whether people like it or not, cryptocurrencies would become an integral part of everyone’s daily lives. Gobbill is currently trading with fiat currencies as well as debit/credit cards and will soon incorporate digital currencies as a mode of payment.

The operations manager of Cointree, Jess Rendon stated that the company already had a payment service system for users but through this collaboration, they can expand their services and at the same time, make the process faster.

A Twitterati commented on the partnership saying:

“Another great step towards mainstream adoption in Aus #crypto”

“I keep my fingers crossed, and I’m glad I’m participating in a innovatory project))”