In 2017 – early 2018, the world experienced a boom of ICO-based capital raising projects, comparable in intensity
with the dot-com dream fifteen years ago. The overinflated bubble in cryptocurrency market has attracted venture capital to a wide range of industries, leaving only the way of investing unchanged, that is the purchase of tokens, or digital equivalents of investors’ shares within projects of their interest.

An Initial Coin Offering (ICO) — or initial token offering — has proved to be so simple and convenient way to attract capital from many sources, that, according to icodata.io (Figure 1), the volume of project financing via selling tokens back in 2016 was more than 13 times bigger than in 2015, and in 2017 compared to 2016 it was more than 66 times bigger! True, according to coindesk.com, the annual indicator growth was not so significant. For example, in 2017 in relation to 2016, it increased “only” by 21 times. 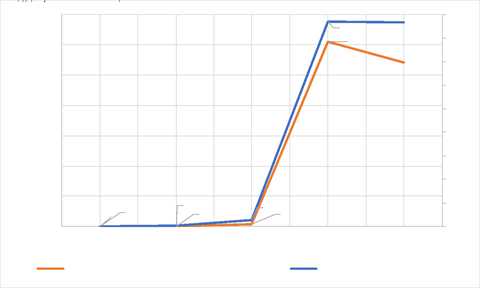 “The difference can be explained by not equal accounting methods for the number of ICOs and the amount of capital,” comments Alexey Nasonov, the head and shareholder of the European fintech company Worldcore, which launched a successful ICO back in fall, 2017 (WRC token).

“There are so-called Private Placement ICOs (PICOs), where tokens are bought by a limited number of investors. As a rule, the number of investors in such cases is limited to a few dozen people or funds, and transaction data is very scarce or completely unavailable. The success of such placements can be judged only on the basis of indirect data, like new token appear in the listings or, say, there are executed smart contracts on their tokens exchanged for Ethereum.”

At the moment, according to icowatchlist.com, the variety of projects that have ever placed their ICOs is unevenly distributed across 24 segments (Figure 2).

Fig. 2. Distribution of ICO projects by industry (from icowatchlist.com) 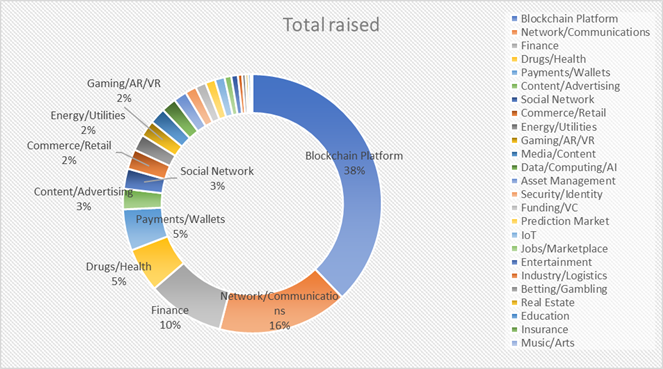 The largest number of projects (74%) is concentrated in the field of blockchain platform design, network/communication, finance and health.

“This is what both variety of projects and amount of funds raised mean. In addition, the declining share of infrastructure projects, including network and blockchain-based technologies, indicate a successful process of adapting blockchain platforms to business requirements. Compare with 2014 when, for example, Ethereum and Storjcoin entered the public space. Then the share of infrastructure projects was 100%. Thus, blockchain technology was trying to enter into the market.”

If we assess the changes that have taken place within the ICO industry during the boom of the second half of 2017 — the first quarter of 2018, and a noticeable decline in the second quarter of 2018, then two important factors can be identified: a colossal increase in investment volumes with growing capitalization of the cryptocurrency market — and a huge number not just unsuccessful but obviously failing projects in which the recipients of investment did not even intend to fulfill their project development promises. The volume of such ICO start-ups varied, according to different estimates, from 81 to 59%.

According to these studies, the reasons for ICO failures, as in the case of ordinary projects, are mainly economic: underestimation of both demand and investment volumes, plus overestimated project team skills. Secondly, there are technical reasons: the impossibility of achieving the planned effect (based on the results of the work performed), or inability to create a new technology. At the same time, the average amount these companies collected for their project development, has been increasing till they reached, according to coindesk, its peak of $16 million in 2017.

While more than half of all ICO offerings are fraud, venture capital looks for ways to evaluate projects that are independent of project team’s statements. In the Internet boom of early 2000th this search took about five years. For the blockchain industry, the search time will be shorter, and most likely, we will see the second wave of ICO boom in 1–3 years. During this time, the financial regulators of the world economy giants will work out coordinated approaches to digital assets within ICO process, and blockchain developers will offer universal blockchain options for projects in various sectors of the economy, while financiers will improve the methods for assessing the success of ICO.

“In the context of ICO, blockchain is just a convenient crowdfunding technology, and investment projects in the economy are trying to satisfy market demands,” says Worldcore CEO with no illusion.

“Therefore, in the next few years, we can expect a significant decline in the share of infrastructure projects following the creation of more convenient ecosystems. And the final shift of ICO startup industries ratio — because of their unique synthesis of mass and behind-the-scenes character — will be a certain mixture of Kickstarter funding categories and the venture capital structure of the world economy. The number of cryptocurrencies and tokens will grow at the same time, but the failed ones will be written off to losses and pass compulsory delisting on crypto-exchanges. So, at a certain stage, one may expect stabilization of the number of tokens circulating on the market. However, this is still a fairly remote perspective.”

1 The data are not final, there are errors in the processing of data by the source.

2 By 2018, the average data is heavily distorted due to the market entry of the largest ICO in history, that is Telegram messenger’s TON ($1.8 billion).