To those who haven’t gained a real understanding of the potential of Bitcoin a question that comes up a lot is, what exactly is it good for?

Without answering “buying things on the dark web,” it’s not really an easy question to answer in the present tense. There are some great deals to be had using it, it’s slowly getting better for sending value across borders, but it certainly has not yet found its one absolutely must have function yet.

It’s my oft-made argument that the reason for that is the true role for Bitcoin has not materialized yet. It will one day be a solid store of value and means of
everyday as well as cross border transactions, but before it can be that, first it has to rise several magnitudes in value.

And the fact of the matter is that slow adoption of people using Bitcoin is not going to let it achieve that goal. No, Bitcoin needs a catalyst that it will propel it suddenly and precipitously to many multiples of its present value. And that event will be a political and/or financial crisis that will make the Lehman crash of 2009 pale in comparison.

A few days ago, Think Progress published an expose revealing that Peter Nav 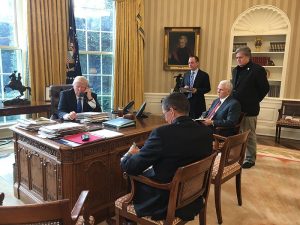 arro, head of President Trump’s National Council on Trade, has invested some 15,000 dollars shorting the US economy.

Now the piece itself is mostly written to expose the hypocrisy of the Trump administration, which has taken a strong America First line. The revelation is noteworthy. Given the brash promise the administration has made about pumping up the economy and returning jobs to America, there should be no hesitancy from anyone in his administration.

Nevertheless, the revelation is also hardly earth shattering.. To a man of Navarro’s stature, 15,000 dollars must be a small portion of his portfolio, and it’s probably there as a hedge against adverse eventualities more than anything else. He’s not betting against America; he’s taken insurance that in the event anything did happen, at least some part of his portfolio would do well.

In 2009, the Lehman crash was precipitated by a lack of regulatory oversight leading to investment banks selling instruments they knew were bad, and then using the money to buy shorts against the instruments they were selling. Trump and his advisors are stripping as many regulations as they can, creating an even bigger wild-west attitude. This alone makes for a dangerous situation, but add to that the Russian-connection allegations that are increasingly swirling around this White House, and we may be seeing the start of a perfect storm.

An embattled president creates uncertainty in a market made unstable slick practices, causing the market to tumble, causing reactions both against and from the administration, causing responses from alienated trading partners… Things may get very bad, very quickly.

Given that Bitcoin can overcome its own political battle over how best to accommodate a global economy, which it increasingly looks like it will be able to do, one way or the other, then when that storm hits, Bitcoin is going to be the perfect safety net of value. Millions, … billions will flow into Bitcoin until it becomes the one, undeniable, global currency operating with and between all the national currencies.

I don’t begrudge Mr. Navarro his hedge against the unknown. It’s the smart play no matter how sure he is that things will work out the way he thinks they will. But, I would also say he should supplement that bet with 15 bitcoins.
Just a little Bitcoin in everyone’s portfolio might, just might, make all the difference.