For the last week it appeared as though Bitcoin might crest the 1,300 dollar mark, but was continuously pushed back just shy of achieving that goal. Then a couple of days ago, it experienced a sharp drop and has been losing ground ever since. As of this writing, it is hovering around the 1,140 mark and seems likely to go lower. 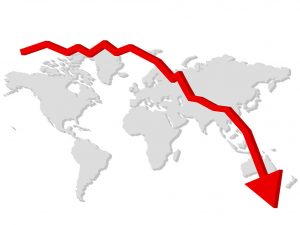 Two observations I have about this drop is that, like with many drops in the past, it does not seem to be a slow attrition of the price, but periods of consolidation punctuated by strong sell orders – suggesting that the drop is being led by specific investors or institutions and not by the broader market. The second is that the US market seems to be leading the drop as GDX and Kraken have been trading fairly consistently lower than the Chinese exchanges, something that hasn’t typically been seen in the past.

Some have been claiming that the drop is the result of Antpool signaling its support for Bitcoin Unlimited, the major competing client to Bitcoin Core, there doesn’t seem to be any reason to think that this is true. There are still far fewer BU nodes signaling than Core. For now, neither of the two big scaling alternatives, raised blocksize with BU and Segwit paving the way for Lightning networks with Core seem like they will be seeing activation anytime soon.

That’s not good news, but it’s also not new news. Sooner or later, despite the acrimony in debate (and for the record, I have seen far more belligerence and name calling from the Core side than the BU side), eventually we will see a win by one side or the other, a compromise, or a work around.

No, the big news story that must be driving the price is the fact that the SEC must approve, reject, or no comment (default approve) the Winklevoss Bitcoin ETF by March 11. If approved, there is the possibility of a great deal of institutional money being poured into the Bitcoin space, raising the price considerably. If rejected, then, … well … things will progress kind of like they are now, which is a general trend of adoption and development.

The prognosis for whether the exchange will be approved or not is anybody’s guess. On the ‘it will be approved side is the fact that if it were going to be rejected, it would likely have already been done, one of the two officials who will make the decision seems inclined to permit, and the Trump administrations general hands-off attitude toward regulation. On the ‘it won’t pass side’ is the fact that it is a new, risky instrument and the SEC is a conservative agency. Much easier and safer to stop the fund and let a future administrator approve one if they want. Plus, all of the ransomware attacks, use of Bitcoin on the darkweb, the fact that much of the mining is happening in China, etc.

So why the price drop? It seems likely that large investors are protecting themselves from a loss after a rejection, and preparing to buy back on the dip that will the rejection will precipitate. On the flip side, if the exchange is approved and the price jumps, they can still buy back in on the continued upswing, and will have only lost some differential in price, but still come out positive.

In the long term, an ETF approval would be a good jump start for the Bticoin ecosystem, and I hope that it gets approved. I’m not counting on it, though, and will continue to HODL as I’ve done through all of the ups and downs.

Far more than the ETF, the news I am hoping to hear is that the CORE development team start listening to the real concerns of many in the Bitcoin community, make reasonable proposals and write reasonable code to meet those concerns, and get Bitcoin moving again.
But I guess that’s just wishful thinking.