Fortune Magazine had an interesting article talking about the likelihood of the Winklevoss Bitcoin Trust getting SEC approval or not.

In general, the article was fair and informative, and, also in general, it’s nice 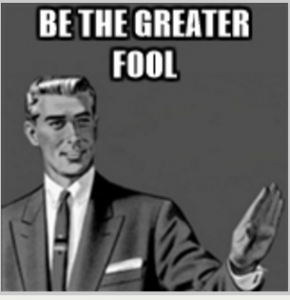 to see the increased amount of informed and balanced coverage Bitcoin has been getting in the press lately. Of course there are negative hit pieces written by experts who presume their resumes preclude the need for supporting facts, but in general the coverage has been picking up. There was only one line that I took issue with in the Fortune article:

According to Estes, the SEC may worry the agency’s approval of an ETF could lead to a bubble inflated by bitcoin novices—a bubble that could then pop. “Some fear it could be a good opportunity for legacy players to find the next sucker to take it off their hands,” said Estes.

This might be something reasonable to say with some of the pump-and
-dump scamcoins we’ve seen over the years. It does not seem a reasonable thing to say about Bitcoin.

In its short 8 years, Bitcoin has seen a tremendous amount of drama. The initial bitcoiners were a hardcore, technophile, frequently libertarian bunch. They were in it for the tech and the politics, and their number can still be found at Bitcoin meetups.

Those who joined in 2013 and 2014 have seen Bitcoin spike, crash, and not do much of anything. All the time it was doing that, there were hacks, thefts, frauds – never with the core blockchain or software of Bitcoin, but enough to make many wary of it as a dangerous instrument.

Then there have been the near constant questions about Bitcoin’s legality and how governments and law enforcement would treat it. The fact that Bitcoin has been called the currency of the dark web, completely obscuring the fact that cold, hard cash is still the currency of choice for most criminal enterprises. There have always been fears that somehow the government would step in and quash this financial experiment.

People who hold Bitcoin do so not for short-term gain. They may do so to get rich, but that bet is based on a belief in the fundamental nature of Bitcoin and what it can do to disintermediate banks, credit card companies, and governments from our private financial affairs. And when you pick up the newspaper any given day, you can see the need to disintermediate the banks, the credit card companies, and the government.

Bitcoin is the cash of the internet, pure and simple. It returns financial control to people. And the people who have held it and helped to develop it through all the drama of the last eight years are not waiting for someone else to buy at a slightly higher price so they can dump it.

I have a small investment in Bitcoin. It is large enough to give me hope for the future, but not everything I own, because it is, after all, still and experiment. Even if Bitcoin were to go to 50,000 on the news of an SEC approval of the Winklevoss trust tomorrow, I would not be selling. I might judiciously upgrade my lifestyle, but after taking the wife to dinner and getting the kids a few toys, I would continue holding my bitcoins, and continue to try to get more.

My hope is not that there will be a greater fool to start buying Bitcoin, but that it is the greater fools who don’t.