In 1981, Anne Gorsuch was appointed to be head of the EPA by Ronald Reagan. Gors 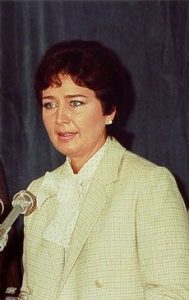 uch, an arch conservative, took to her job of curtailing the activities of the EPA with gusto, eventually leading to a scandal and her removal from the post.

The scandal involved the following accusations:

Her defense? “I was just following orders.”

Now that’s a defense that we’ve heard before, in Nuremberg, and one that as a society we’ve taken as a non-defense. Even in the military with its rigid hierarchy and a clear necessity for soldiers to follow orders, saying “I was following orders” is not considered a defense for carrying out clearly illegal acts or committing atrocities.

As a person placed in a position of trust at the very top of the government, Anne Gorsuch’s responsibility to follow the law was that much more important.

Further, though it never plays out this way, it is my sincere belief that the higher a position of trust you have, and the wider a field of impact you have, the harsher should be the punishment should you commit crimes.

And, it is the moral obligation of every individual to speak up if they are given illegal orders. Anne Gorsuch did not do that. She followed the orders, probably willingly. And her penalty was light given the trust that she had been given.

Yates, a holdover from the Obama administration was in a caretaker position while the President’s nominee for the position, Jeff Sessions, goes through the confirmation process in congress.

In that capacity, she serves at the pleasure of the president, but she has a higher duty to the law of the land. Thus, when Donald Trump signed an order restricting travel from seven countries on religious discriminatory lines, Yates considered the constitutionality of the order and decided that in good conscience, she could not defend it and issued an order to the department not to defend it.

And she got fired.

Now, I do not have a problem with the firing. The AG serves at the pleasure of the president, she displeased him, and he had the absolute right to fire her. But many have criticized her for forcing the firing rather than just stepping down.

Wrong: I applaud her principled stand, as I would for a republican appointee who would do the same thing. (Note – there is a lot of hypocrisy out there when one side blames the other for things they are vastly guilty of themselves.) I don’t have to agree with the stand a person takes as long as I recognize it is principled – and I applaud Sally Yates for NOT following orders, and for calling out the president for what is clearly a very questionable, at best.

We need more people, not less speaking truth to power and lets reward it when we see it.

Unfortunately for us, Trump’s nominee for the supreme court is Neil Gorsuch, son to Anne. His perceptions will no doubt be informed by the scandal that surrounded his mother’s departure from the EPA, and if confirmed for the bench, as I fully expect he will be, we will have one more person on the highest court who will privilege loyalty and power over justice and law.
Things are getting worse, not better. Send a shock to the system. Start using Bitcoin.