I do not agree with what you have to say, but I’ll defend to the death your right to say it. 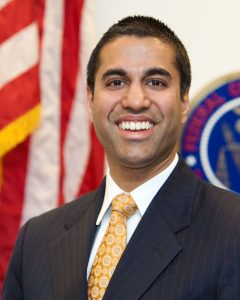 As the news continues to be full of Trump’s so-called Muslim ban, the wheels are starting to turn to make much more fundamental, and difficult to rollback, changes to how life in America works.

Over the years there have been a number of attempts to give internet providers free rein over how they manage, or inhibit, the content that their downstream users get. The goal of the providers is to have complete control over what can get transmitted over the internet, or at the very least, how fast.

If a website wants to have fast speeds, then it will have to pay for the privilege. If a website has a business model or a message that the providers don’t like – they can simply slow down the speed at which that site can load, or block it altogether. It you are on one provider’s network and want to view content sponsored by another provider, you may have to pay a premium to view or may just be SOL.

The key change is that Ajit Pai has been promoted to lead the FCC which regulates internet providers. Currently, the internet is viewed as being a common carrier, which essentially makes it like a public road. The providers may put people on that road, but they cannot capriciously obstruct how people use those roads when they’re there.

Pai is a vocal opponent of that idea, saying that he wants to get rid of all regulations that ‘hold back investment.’ This term, hold back investment, is a dog whistle. It seems to mean a good thing – bring in money to help develop the infrastructure and benefit us all. What it really means, and what his future employers in the industry hear, is that they will be given free rein to create different tiers of usage – like a cable company charging for premium channels. And they will have the right to not allow any content that they don’t like, for any reason.

The problem with this is that free access to information is key to a free society. Whether I’m a billionaire or a pauper, I should be able to get to any information out there without having to pay the middleman providers anything more than an access fee. (And there’s a really great argument to making access free too). Of course, many sites have paywalls for their content – which is natural as they are the creators of that content – the providers will be skimming money from the pockets of the creators, inhibiting their ability to create great content. And finally, it is the ability of people to learn what others are saying and think, even if those views are unpopular or wrong – because once we start limiting that speech, then there is way to keep them from limiting all speech.

We have already moved far in the direction of becoming a corporate kleptocracy, and the destruction of net neutrality would be one more solid nail in the coffin. I suspect if there weren’t so many other disturbing things going on in the news that there would be large protests over this development –  but with so much else going on, it’s easy to miss these less sensational, but life altering, developments.

The internet is to the modern era as roads have been throughout history. Control the roads, and you control the people. Let’s not be controlled. Keep the internet free for all.