Pyments.com had a grab-bag article describing the current state of Bitcoin on their site for the last few days. I was particularly interested in this article as the title is Bitcoin Tracker: Denouement? Now the word denouement essentially just means ‘endi 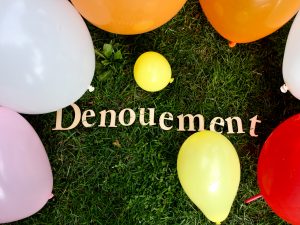 ng’ and is used in literature for when all loose ends are tied up.

In the context of Bitcoin, I was a little confused since, in-and-of-itself a denouement is neither good or bad (it depends on if you’re the hero or not), but it certainly means ending. Is Pyments claiming once more that Bitcoin is dead?

The article starts by talking about the recent regulatory crackdown of the Chinese government on Bitcoin exchanges along with the chilling effect this had trading volume. Despite this seemingly troubling news, the price of Bitcoin has largely held stable, initially dropping from nearly 1,200 dollars to about 900 before recovering and holding steady above the 1,000 dollar mark.

What the article doesn’t get into is the fact that it was the fickleness of Chinese regulation that led to the multiple drops in price in 2013 and 2014 after Bitcoin hit an all time high of 1,200, bottoming out at about 200 in 2015. This was so true that the statement ‘China bans Bitcoin’ attended by a sudden drop in price became a joke within the hardcore Bitcoin community. One of the reasons that China could have such a big effect on the price was that the Chinese exchanges had unnaturally high trading volumes as the exchanges didn’t have any trading fees to cool overheated speculation.

So, the involvement of the Chinese government this time, to inspect the exchanges, to make sure they were not breaking any laws, and to impose trading fees had a muted effect on the price, will in the long run stabilize the market and are generally taken to be a good thing.

It’s also important to note that Bitcoin is still in its infancy and the direction it takes as it grows up is not immediately clear. If it becomes a reserve currency with base and second tier level protocols allowing it to be fully controlled by individuals, the business models of exchanges and payment processors is merely a transitional phase to smooth t
he interaction between government issued money and cryptocurrency until the later grows enough that people will no longer need to use the former.

The article further notes that Bitcoin in Japan seems to be taking a turning. Mizuho Financial Group has recently invested 1.75 million on bitFlyer, a Japanese Bitcoin exchange and payment processor. In general, the Japanese government has been taking a cautious, but positive approach to Bitcoin, and in April Bitcoin will be officially recognized as a means of payment. Bitcoin trading in Japan is on the rise, and many are expecting that the relatively conservative Japanese public may be set to take an interest in Bitcoin because of this official recognition.

No general article on Bitcoin would be complete without a mention of the spectacular implosion of MT Gox, one of the first and certainly the largest Bitcoin exchange, headquartered in Shibuya in Tokyo until it suddenly stopped trading in 2014, of course contributing to the already downward slope the Bitcoin price was on at the time. The article notes that nearly half-billion-dollars worth of Bitcoin went missing, whereabouts still unknown. The assets that were left are in the hands of the courts and are likely to be apportioned out to investors at some point. The article points out that IOUs for these payments are being traded, and it appears hedge funds are buying these up in anticipation of a skyrocketing price when payments begin.

The MT Gox story is complicated, but one of the things the article kind of misses is that it appears that the exchanged has been hacked and funds stolen years before it went down, and much of the trouble it had later was a result of the owner, a man of questioned ability and temperament, trying to cover up and make good on the loss. It’s also not at all clear how much of the supposed losses were actual and how much were ‘on the books’ losses fake volumes. MT Gox was certainly hacked several time, and funds were stolen, but it’s not clear that it was as much as has been reported.

Then the article ends on a case involving the hacking of JP Morgan by a pastor from New Jersey and the owner of the Coin.Mx Bitcoin exchange. The exchange owner bribed the pastor to let him use the church’s charity to front money-laundering activities. These appear to be real criminals committing real crimes, who happened also to be using Bitcoin.

Which brings me back to Pyments and their denouement title. As far as I can tell, the article is fairly even-handed, noting some good and some ill aspects of the current Bitcoin scene. They left out two big questions that Bitcoin has, the March 11 deadline for the SEC to approve, reject, or no comment the Winklevoss twins’ Gemini Bitcoin ETF. If that gets approved or no commented (which would amount to approval), we could see a massive influx of institutional interest. If it is rejected, it’s unclear what would happen, but I predict we would see only a slight dip in price as the expectation is that it will be rejected by the conservative SEC, so the effect is probably already priced into the market.

The other, more negative, element the article missed is that the nearly two-year long battle amongst developers over how Bitcoin will best scale continues to be vitriolic, divisive, and with no sign of immediate resolution. In my opinion, we will not see a true ‘denouement’ of the current Bitcoin story until that issue is resolved, one way or the other.

So what exactly is the denouement the title is talking about? I can only presu
me that the title writer, with a predisposed negative attitude towards Bitcoin (it is a payments website, after all), was to ambigiously suggest that Bitcoin, once more, is done.
I appauld Pyments for the even-handed article on the state of Bitcoin. I have to wonder about the FUDish nature of the title, though.