When the Supreme Court decided the Citizens United case and struck down many laws on legal limits on contributions to political candidates, they defined money as spee 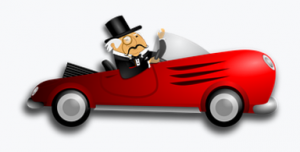 ch. To counter concerns of undue influence and corruption, the Court claimed that an open contribution process whereby everyone would know who was contributing how much to which politicians would take care of this.

Even at the time, it was apparent that that would not be the case. SuperPacs, bundlers, dark money groups, and independent advocacy groups in support of against different candidates operate with near complete anonymity for their donors. Worse, the cost of campaigning is now so prohibitive that politicians have to spend most of their time raising money for their next election rather than working for the people who elected them.

John Cox of California has taken an idea that’s been floated for a while and is seeking to make it a reality: to require politicians to wear patches announcing their top donors. Right now he is trying to get enough signatures to make this a ballot proposal–taking the decision out of the hands of the legislators who are already captured by the system and put it in front of the people.

Whether or not this proposal succeeds, the fact is that we need much more of this kind of thing.

One of the advantages of Bitcoin is that it is a public ledger and could be made into a completely transparent way for politicians to receive funding for the campaigns. All contributions to a candidate could be made to a publicly published address. All expenditures a candidate makes would have to be trackable from that address. All donations would have to be made from registered addresses of individuals or entities. Any donations not from a registered address would have to be forwarded to a public fund supporting a fair and equitable election process for the benefit of all citizens.

This is not government for and by the people. This is oligarchy, and we should all be doing everything we can to keep our politicians accountable to all the nation’s citizens, and not just the 1%.