It’s kind of an unlikely story: Jeff Pfannerstill is an American working as a contractor in Afghanistan. He describes himself as financially non-adept and risk averse. However, after overhearing a conversation about Bitcoin and asking about it, he decided that he would be a couple and use them as a way to teach his children about money. He gave the bitcoins to his children and now they watch what is happening on the exchanges and are beginning to learn concepts and skills that will benefit them their whole lives. Further, they may just be getting in on the (nearly) ground floor of what is increasingly looking like it will be a really big thing. (Check out the

Stories of Bitcoin and kids are starting to become more and more common: from The Bitcoin Wife talking about how she is encouraging her children to do their chores with Bitcoin, to the Bitcoin kid who has been roaming conferences interviewing major players, to the kid who got shares of Apple for his ninth birthday and then decided to cash them in for Bitcoin.

Now, Bitcoin has caught the eye of the Sabra sisters, a trio of teen tech bloggers who have been creating websites since 2010 to promote STEM for kids. Homeschooled and precocious, these three girls have set about to make science, technology, engineering and math more accessible for kids. Each sister has her own area of interest: JuJu, 13, is an aspiring Neuroscientist, GiGi, 12, wants to be a pediatrician with on an eat healthy, play hard” lifestyle, and JoJo, 10, who is into a frugal, green gardening lifestyle.

When their uncle asked them if they would like to learn about Bitcoin, they were so enthusiastic they created the website BitKidz.com as a way of telling him they would. Now, these enterprising sisters have written a series of books, Bitcoin for Kids, aimed at making Bitcoin accessible for kids and their parents.

The focus of the books is to personalize Bitcoin and show people that what they are hearing about it daily on the news is not the whole story: bitcoin is not just for criminals, it is not too hard or too technical, and it has a lot of potential to do good in the world. Or, according to JuJu:

People stay away from Bitcoin because they either believe it’s too volatile, attracts criminals, or, they think Bitcoin is so high-tech that the average person won’t be able to understand it. While there’s some truth to those extreme statements, by writing a book series by kids for kids we’re demonstrating that if kids understand Bitcoin, so can others!

I can well understand the feeling of the Sabra sisters. My own children are just 5 and 3 now, but they are the reason that I became at first interested in, and then excited about, Bitcoin. I have started talking to my son about Bitcoin, about my website, and about what these things might mean for his future. Although nearly everyone I know is still saying that Bitcoin might go to a million or to zero, but they are also saying that if Bitcoin implodes, the better version will just take its place. Nongovernmental digital currency seems like it is already a foregone conclusion. Getting our kids in on it may be the best gift we can give them for their future. 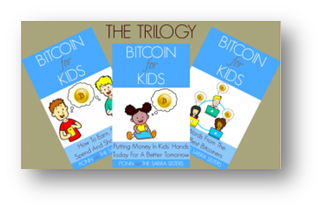